This year I was asked by my friend Craig Bentley to co-producer the National Academy of Television Arts & Sciences, Pacific Southwest Chapter, Emmy Awards night. I was the on-site live event producer at La Costa Resort & Spa in San Diego.

In addition to my television experience I have a great deal of live event experience with corporate awards shows. My approach to live awards shows stems from many live events I have worked on all over the world. This year's Emmy show was no different. The approach was to make this a memorable event to those attending.


The positive feedback we received was overwhelming. Some saying it was the best awards show in the 20 years they have been attending. 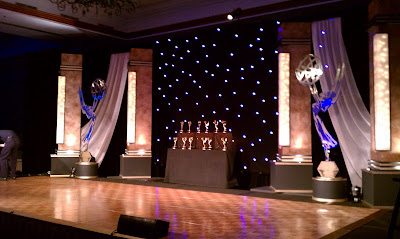 This is just one of the kind emails we received:
I just wanted to say that this was my first Emmy ceremony since moving to San Diego.  I’ve been to lots of them in San Francisco and Washington, DC, but this was by far the best production, (and party) that I’ve seen.  This NATAS Chapter has its act together!  Congratulations to all of you for your hard work all year long to pull this off.

Maura
KPBS Senior Producer
The real thanks go our excellent crew, volunteers who gave freely of their time to make the show a big hit. With set design by Donald Benke and video direction by Donn Johnson; the crew is too large to mention everyone by name, but they did a super job.

Many thanks also go the NATAS Board members who pulled it all together: MaryEllen Eagelston, Brian Birk, Suzanne Bartole-Owen, Jeanne and Devin Scott, and our executive director Amy Bosler.
Posted by Michael at 10:59 AM 1 comment: